The city of Bergamo

The province of Bergamo, situated in the eastern Lombardy region, provides a combination of cultural and artistic history as well as modern developments. The city is divided into two parts: “Città alta” (upper city), a hilltop medieval town, and the “Città bassa” (lower city), where the shopping district is located. The two parts of the city are connected by funicular, roads and footpaths. The old medieval structure is still intact in the city and you can see narrow streets, tall houses with picturesque windows and doors, and often secret passages, within the old Venetian walls. In Città Alta the most visited place is Piazza Vecchia (Old Square) with the municipal tower, the Town hall, siege of the citizen government from the Middle Age, and Dom’s square with the most important religious monuments of the city, the Dom dedicated to St. Alexander, the Basilica of Santa Maria Maggiore, Colleoni’s Chapel and the Baptistery.

In the upper city music lovers can visit also the birthplace of Gaetano Donizetti, his museum and the grave where the music composer, famous all over the world, is buried. In the lower part of the city the most popular place is the Accademia Carrara which has recently re-opened after 7 years of restoration and which is one of the most important Museum in Italy for Renaissance.

Getting around the city

The best way to get around Bergamo is on foot: the distances are relatively short, and walking through the streets of the city is also an extra opportunity to discover all its beauty. To get on and off the upper town you can use the bus (line 1) or the wonderful historic funicular. In both cases, you need an urban transport ticket (Tariffa A, Zona 1, green ticket, €1,30 for 75 minutes). Ten-ride carnets (€11,50) or tourist tickets (€3,50/7,00 for 24h/72h) could also be useful.

We recommended you to download the local transport company app (ATB Mobile app) from which you can buy tickets, access the bike-sharing service, check bus timetables and the location of bus stops. 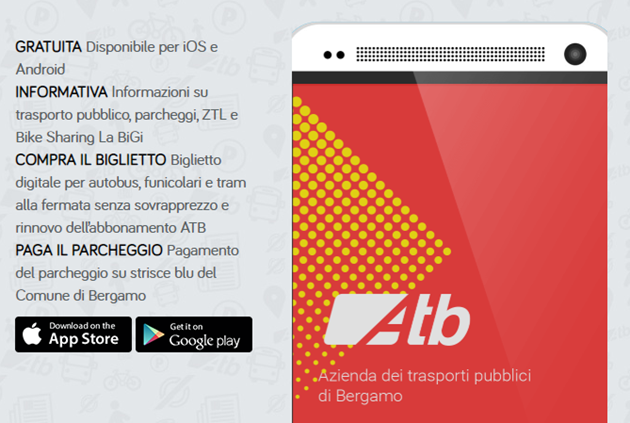